Inicio Premier League Arsenal Edu: ‘Arsène Wenger was a man who had me like a son’ 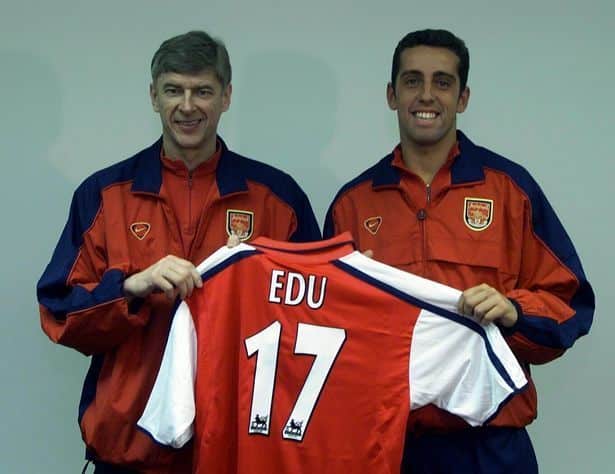 He is the first Brazilian player in the history of English football to win the Premier Legaue. Also, he was part of the Invincibles squad. To achieve this he had to overcome a lot of obstacles in his life.

PL Brasil: Regarding Arsenal's interest, was it just the Gunners that tried to sign you or did you have a range of clubs to choose from? In what sense, did English football seem more attractive to you?

Edu: Actually, Arsenal came along and it was all very fast. Then Barcelona came in. I was on their radar, so much so that Barça signed Fabio Rochemback at the time.

And they said Rochemback was the second option because the first one would be me. It was a surprise because I was invited to a dinner together with the Arsenal directors.

I sat down at a hotel dinner and they were very sincere to me.

The first question they asked was, ‘Edu, would you like to play for Arsenal? Can you see yourself in England and at a club like Arsenal? “I said,” Of course I do. Because of the country, the city, the players, yes. For me, it would be an honor.'

Their response was, ‘So, we are going to sign you. It was a request from Arsène, who came to Brazil, watch me in four or five games.

PL Brasil: And just when you got to Arsenal, it was a bit complicated. You had a problem with your ‘forged passport'…

Edu: It was a very bad start. I think Arsenal recognizes me for what I went trough. They see me as that lad who persevere.

I started with my passport problem. I had to wait and spend four more months here training and playing. When I went there, I solve all of this problems related to my passport. I was deceived and I proved it.

The start was very hard because we were in the middle of the season and I was not well in my first games.

I had not trained much time and they already put me to play in 10, 15 days. In my first game, I was playing well, but I picked up an injury in ten minutes of play. Then I started to play one game or another and didn't play well. Arsène was a guy who stayed by my side.

I had a personal problem that, not everyone knows, but my sister passed away a week before my trip to England.

Everything bad that could happen, happened to me.

But I knew why I had gone. I had to win there. It was not going to be a Brazilian who was going to go there and come back for any difficulty. I said: ‘I will fulfill my contract, I will play, stand out and end up doing everything right'.

Injury in his first appearence

PL Brasil: Speaking of your first game. With 10 minutes, you picked up an injury. Then you played four more games and scored once against Middlesbrough. There you thought, ‘Why is everything going wrong for me?'

Even with in the hard times, I used to think: “S***, this is hard”. When I was playing for Corinthians, evertyhing was great. I was playing well, the club doubled my salary three times, the fans loved me … But I knew that, at Arsenal, I would have to conquer everything again.

I had the support of my wife who was with me there during hard times. I had a problem with Henry.

We had a serious problem, we discussed, I felt very bad and it made me think, ‘Why is all this happening? Was I supposed to come?'. Then I changed my mind. ‘I will fight, I will win. So the next season I was much better.

PL Brasil: The next season Arsenal won the Premier League title – the first Brazilian to win it – and the FA Cup as well. What was that like? To have a bad start and went to win the Double?

I won't deny that it is a personal achievement, because I went down in history. I'm the first Brazilian in the history of English football to win the Premier League. For me, without a doubt, it was really great.

Arsène helped me a lot too. Arsène was a guy who had me like a son. Today we have a reciprocal affection. We remember the stories, everything we spent together. A man who was on my side. He understood the moment I was passing, that those initial six months would be hard.

PL Brasil: “Was that your best season at Arsenal? You played almost every game coming from the bench… “

Edu: Yeah, it was. If you look the numbers, I played lots of games, important games too. Arsène was very active in the team because we were fighting for everything: we were playing the League, the Cup, the Champions … we were playing everything.

For me, without a doubt, this season was very good. Certainly, it was very remarkable.

Biggest rival and the Invincibles season

PL Brasil: In 2004, you scored two goals against Chelsea. However, the Blues knocked out Arsenal of the Champions League quarterfinal. Was Chelsea your biggest opponent?

Edu: For me, it was Manchester United. And that game – this competition, in the case – if we passed through Chelsea, we would've won the Champions League. Because Porto was the champion at that time and our team was really in a spectacular moment.

In my point of view, we had the same team playing in those five big games. So, in the second half of those games, we weren't playing well enough. We lost to Chelsea in the second half. Maybe if I had a strategy a little better there… We had a better team than Chelsea.

Thinking as a team

PL Brasil: Was there a player or suddenly someone of the coaching staff who played a very important role for the team but was not usually much remembered? Was there such a player?

Edu: No, it was the whole team and coaching staff that was responsible. Of course, within a group, when everyone is working well, Henry stand out for making more goals, the Bergkamp for the class he had, Patrick Vieira in the midfield … well, the team was sensational.

Wenger and the winning mentality

Edu: Arsène put it in our head – and it's also something that marked me and a lot for us at the time – that we had the team that could win anywhere, as long as we had a winning mentality.

We had to get on the field knowing that if we played well, we would win the game. We went into the field with such a great respect from the opponent that it seemed that the opponent already knew that they were going to lose. So this for us was even more motivating.

Arsène said, ‘Are we going to play at home? Let's play just like we play away.' When we left the field, one looked at the other and said: ‘We will run over them!'

Thiago PL Brasil: Who were the toughest opponents to play away, the grounds you wish you would avoid?

PL Brasil: What is Wenger's great quality as a coach? Is it a tactical side? The human question? Why does he have such success keeping himself at Arsenal for so long?

Edu: For me – and I can speak personally – what struck me most was the human side he demonstrated at the worst moment I could live in my personal and professional life, which was the loss of my sister.

He understood this because he knew that I would not be able to do my best on the field because outside things were not well. In that sense, I had to take my whole family to England: my father, my mother, my brother … for all to bear with each other.

So, after training is very hard. That way, Arsène understood and always talked me to know what I was feeling. He never talked about the tactical or technical stuff. He wanted to know how I was with my head, whether I was focused, if I needed anything, if Arsenal could help with anything.